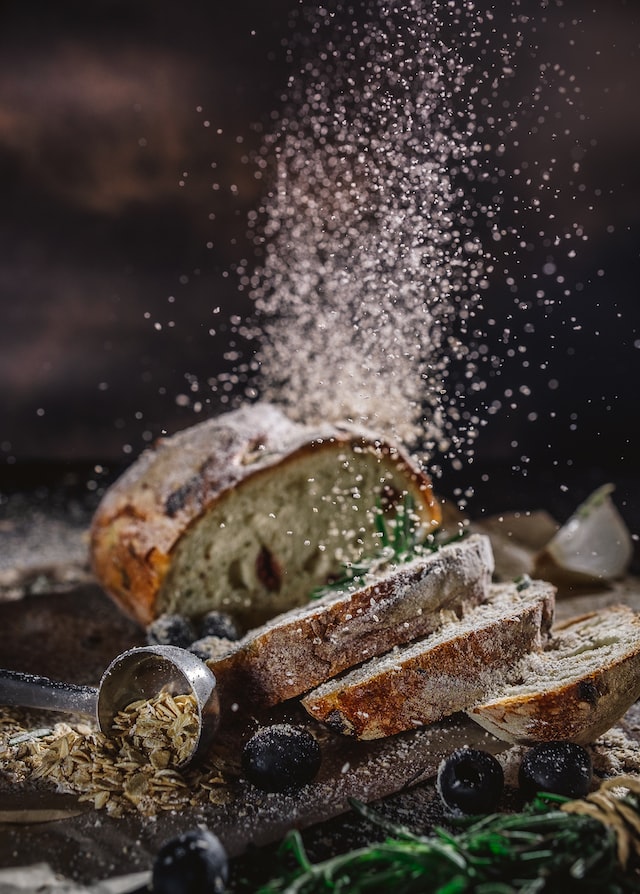 Since the basis of the product is wheat, the bread also consists of 85% starch and 15% germ, and 14% shell. All nutrients are found in embryos and shells. In addition, flour undergoes additional fortification, while vitamins of artificial origin are absorbed by the body worse.

According to the standards, some other substances are added to the flour. Still, their usefulness, in general, cannot be said. It is done to improve the baking properties of the flour.

In the past decade, the food industry has used a lot of various food additives that can improve product consistency, increase shelf life, etc. It happens not only with wheat but also with other foods, such as milk or meat.

However, some of the additives used are toxic. Of course, doses of these substances may seem insignificant, but many of them accumulate in the body.

Benefits and harms of bread in bodybuilding

The fermentation process is widely used in everyday life and the food industry. The essence of this process is the breakdown of main carbohydrates into simple compounds by microorganisms and their secretion. The energy obtained during fermentation feeds the organisms that cause it.

A similar reaction occurs in the human body, where carbohydrates are broken down with the help of phosphoric acid. However, lost some of the energy due to fermentation is inevitably lost to the body. The same happens in the production of bread.

During the dough’s production, alcohol and lactic acid ferment are used thanks to yeast and bacteria. In addition, chemical lifting agents are also used. All this makes bread less energy intensive than whole grains. We can already tell about the benefits and harms of bread in bodybuilding. From an energy point of view, there is certainly no benefit.

It should also note that substances obtained from the breakdown of carbohydrates using only microorganisms can be toxic at almost any concentration. Thus, when you eat bread, the intestinal microflora is damaged. But you start using bread early on, which can in no way positively affect the digestive tract.

People have known the harm to the body for a long time from bread made from yeast dough. Some people used only unfermented food for food. It’s worth noting that all products that the food industry has “improved” or purified absorb water from the body. It is what causes the urge to wash down such products when consumed.

As a result, we get a vicious circle: we consume food, thirst appears, we quench it with drink, wash away digestive juices, and there is a lack of nutrients. It can also cause colon dysfunction. That’s why obesity appeared, which now suffers from many of the world’s population. And again, about the benefits and dangers of bread in bodybuilding. Of course, no positive features have yet been discovered.

But, in addition to all of the above, it should add that if the bread did not contain vitamin B in its composition in sufficient quantity, it would not be processed by the body. It can cause stomach ulcers, liver cirrhosis, and other gastrointestinal diseases.

The necessity of eating bread in bodybuilding

We are not talking about athletes; we will return to this below, but about ordinary people. Nobody calls for giving up bread. What to eat is an individual decision. But it is worth noting that bread is now produced according to old recipes and particular foods intended for people with metabolic diseases, diabetes, etc.

Bread and cereals contain large amounts of plant protein compounds. When it is used in food from bread with bran, in addition to a large number of vitamins and minerals, the body will also receive dietary fiber, which it needs so much. It will also help prevent many gastrointestinal diseases.

In light of all the above, mention should be made of cereal bread, which is made from whole grains or grains and does not contain flour. They are not subjected to culinary processing, allowing you to preserve all the nutrients placed in the grain by nature. This bread product can satisfy human needs for microbes and vitamins. In addition, the fiber contained in plant fibers effectively removes various toxins from the body.

In this case, you should combine bread correctly with other products. For example, bread does not go well with meat, as a different environment is necessary to process the substances that make up their composition. Starch, abundant in bread, is processed by the body in a neutral background, but the meat needs acidic starch. Do not combine bread and sugar as this can lead to food fermentation in the stomach.

And now you can return to the central question of the article – the benefits and harm of bread in bodybuilding. Of course, some athletes find it very difficult to stop eating bread. It said above that it is better to use it for food. It has also already been mentioned about the low energy contained in ordinary bread. Athletes need to supplement energy reserves; for apparent reasons, bread is unsuitable for this purpose.

Someone might say that this product contains carbohydrates, which are also necessary for athletes. It is difficult to argue with this, but other products contain easily digestible carbohydrates, for example, cereals.